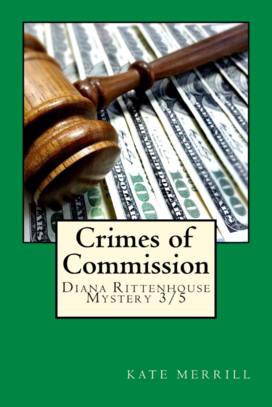 ​​
Realtor Diana Rittenhouse is as shocked as everyone else in her small North Carolina town when someone starts murdering their five commissioners. The authorities believe the deaths are unrelated.  After all, these elected officials are diversely different in gender, race, political persuasion, and personality. Their unique character traits, domestic situations, and romantic entanglements suggest individual motives for each murder and many different suspects.
But as Diana, along with her longtime lover, Matthew, elderly mother, Vivian, and best friend, Liz are drawn into the circle of intrigue, they come to believe the only common denominator for the murders is the victim’s roles as commissioners. The five have the power to rezone, issue permits, and reject or approve multi-million dollar land deals. Most disturbing of all, Diana’s pet real estate project emerges as the likely catalyst for the killings. The deeper she digs, Diana is targeted as the next victim, and as the complex truth emerges, she fears the killer is not an unknown psychopath as the police assume, but rather someone in her closest circle of friends.